It’s a common misconception that fat people sink. In fact, they float just like normal-sized people do. I found it strange when I saw that this was a popular question people are asking on forums. However, it is true that the more overweight you are, the more likely you are to float.

What most people don’t realize is that everyone floats. Whenever a human body is submerged in water, it will float to some degree. This fact is because fat tissue has a lower density than water.

In other words, the reason why fat people float is that “fat” because it’s less dense than water. And since obese people have more fat than other persons, they generally float easier. However, not all fat persons float equally as how well you float is determined by a few other factors that I’ll go over below:

What are the Floating factors that determine how well an obese person floats?

Several factors affect whether an obese person will sink or float: how much they weigh and how much of their body is made up of fat-free mass (muscles and bones), the air in their lungs, other organs, and body fluids.

Different people have varying amounts of these physical factors that determine their floating abilities. Some obese persons have a percentage of muscle which means they are light and float easily. At the same time, others have a higher percentage of muscles, so this makes them sink easier since muscle is denser than water. With that in mind, you can understand that people with lots of muscles will have a harder time floating.

What is the fat to muscle tissue ratio in humans?

Our bodies’ fat has a relative density, also called specific gravity, of less than 1.0, which is lighter than water. Muscles and bone are both slightly denser, with a specific gravity of just over 1.0.

Generally speaking, there are many types of people who can float easily, and it’s not just us who are obese. For example, the elderly, women, and those who aren’t physically fit tend to float better because they have a higher fat-to-muscle tissue ratio, even if they’re very slim.

No, it doesn’t. There is a common misconception that being overweight will make it easier for you to swim. But the truth is far from what people normally believe as many factors affect how well one can swim, and being able to float due to higher body fat does isn’t an advantage. Other factors such as size, body composition, and fat distribution all dictate how well you’ll be able to swim.

A person with high-fat levels and low muscle mass will float easier. In contrast, people with higher bone density and muscle mass will find it harder to float. With that said, always remember that not all fat persons float equally. And you shouldn’t just assume that an obese person will float since you might float just as well as they do due to your body’s composition. 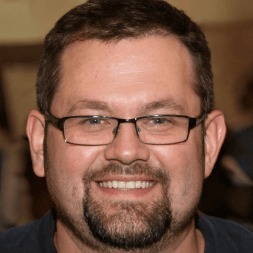